USE OF MORINGA (सहजन -Drumstick): IN BROILER, LAYERS AS FEED ADDITIVES. 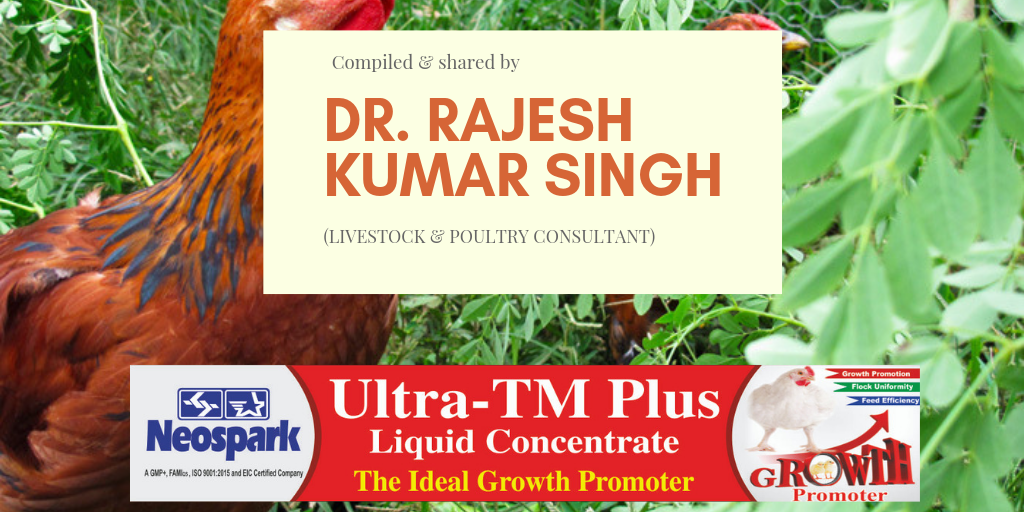 Phytogenics feed additives (PFA), are defined as compounds of plant origin incorporated into animal feed to enhance livestock productivity through the improvement of digestibility, nutrient absorption and elimination of pathogens residents in the animal.

The increase in the cost of animal feeds and the ban on antibiotic growth promoters utilization in the poultry industry have lead researchers to focus their attention on non-conventional feedstuffs. The use of plants as animal feedstuffs might contribute to a reduction in feed cost, increase the production and farmer’s profitability.

Moringa oleifera, commonly known as (family: Moringaceae) horseradish tree or drumstick tree, is both nutritional and medicinal with some useful minerals, vitamins, amino acids. Almost all the parts of this plant: root, bark, gum, leaf, fruit, Leaves, seed and seed oil have been used for various ailments in the indigenous medicine of South Asia, including the treatment of inflammation and infectious diseases along with cardiovascular, gastrointestinal, haematological and hepatorenal disorders.

Administration of Moringa oleifera leaf extract inhibited the growth of pathogenic gram positive and gram negative bacteria and antioxidant activity.  There has been an increased interest in the utilization of the M. oleifera, in improving ruminants farming and poultry performances.  The growing popularity of the use of Moringa oleifera as a feed additive in poultry nutrition necessitates through an investigation into its nutritional value, as well its impact on haematological parameters as a measure of both nutritional and medicinal benefits of the leaves in broiler chicks.

Moringa oleifera leaves incorporated into maize meal poultry feed led to the better growth performance of the chicks and a significant increase in the serum level of biochemical minerals compared to the maize meal feed alone.

Moringa, popularly known as “drumstick tree” for its pods that are used by drummers, and also known as “horseradish tree” for the flavour of its roots. Drumstick scientifically called as Moringa oleifera and is called Saijan in Hindi. This fast-growing tree is grown throughout the tropics for multi-purpose use viz. human food, livestock forage, medicine values, dye, water purification, and for its wide adaptability and ease of establishment. Moringa leaves contain a good amount of beta-carotene, protein, vitamin C, calcium, magnesium and iron. Since Moringa leaves are rich in protein, so can be used as a feed supplement for poultry. Rather, its leaves contain much higher protein than conventional protein supplements like coconut meal, cotton seed cake, groundnut cake, sesame cake, sunflower cake etc. Besides these, the leaves possess antioxidant and antimicrobial properties against several fungal species such as E. Coli, S. Arous, P. aeruginosa, and B. Cereus. Moringa can be grown as hedge, fence, and multi-cut forage, etc.

They are classified according to the part used (whole plant, root, stem, bark, leaf, flower, fruit and seed).

The poultry industry is one of the fastest growing animal industries globally but is hampered by a heavy shortage of feed ingredients especially in developing . Dietary supplementation with 5% or 10% Moringa could improve yolk colour, albumen height and Haugh unit of eggs during storage, and without adverse effects on laying performance and egg quality of layers. Thus, 5% of Moringa could be added to the diets of laying hens. It is concluded that Moringa at 6% inclusion in layers feeds improved egg production and body weight.

Regarding antinutritional factors, Makkar and Becker mentioned that the concentrations of antinutritional factors (tannins, trypsin and amylase inhibitors, lectins and cyanogenic glucosides, glucosinolates, and saponins) were either undetectable or negligible in leaves, twigs, and stems. Kernels, meal (fat-free kernels), extracted kernels, and an extracted meal had low levels of saponins; trypsin and amylase inhibitors were absent. However, hemolytic activity was observed in kernels and extracted kernels. Hemagglutination activity was detected in kernels and meal but not in their extracted samples. Ogbe and Affiku also found low levels of antinutrients in Moringa oleifera leaves. These authors reported that tannins, phytates, trypsin inhibitors, saponins, oxalates, and cyanide content of leaves were 21.19 ± 0.25%, (2.57 ± 0.13%, 3.0 ± 0.04%, 1.6 ± 0.05%, 0.45 ± 0.01%, and 0.1 ± 0.01%, respectively. Table 1 shows the chemical compositions and gross energy (GE) of different fractions of Moringa oleifera.

Effect of moringa leaf meal on the laying performance of hens: – Melesse et al.  reported that use of Moringa stenopetala leaf meal in the diet of Rhode Island Red chicks produced significant (P < 0.05) increase in feed and crude protein intake, average weight gain, feed efficiency ratios, and protein efficiency ratios when compared to a control diet. The authors related these findings to the presence of readily available protein in moringa leaf meal, which is convenient for monogastric animals, and also to the higher levels of methionine and other essential amino acids when compared to the soybean meal of a control diet. The authors concluded that inclusion of Moringa stenopetala leaf meal in amounts of up to 6% in the diet of growing chicks to replace expensive conventional protein sources has no negative effects on the chicks. Kakengi et al. declared that addition of 10% and 20% Moringa oleifera leaf meal to the laying hen diet, as a substitute for sunflower seed meal, significantly (P < 0.05) increased feed intake and dry matter feed intake and decreased egg mass production.

Effect of moringa seeds on the performance of broilers:- Abbas and Ahmed performed an experiment to study the effect of Moringa oleifera undecorticated seed powder (MOUSP) in the broilers’ diet (0%, 0.37%, 0.75%, and 1.5%), specifically concerning performance and carcass characteristics. The authors observed that during the starter period (8–21 days), use of 1.5% MOUSP significantly (P < 0.05) reduced weight gain, body weight, and feed efficiency. During finisher (22–35 days) and whole (8–35 days) periods, supplementation of different levels (0.37%, 0.75%, and 1.5%) of MOUSP failed to produce a significant (P > 0.05) effect on weight gain, final live body weight, feed efficiency, dressing percentage, and liver and heart weights. Therefore, use of MOUSP at an amount of 1.% during the finisher period overcomes its deleterious effect during the starter period. Therefore, it is better to use this level during the finisher period only.

Nutritional Profile :- Macronutrients like P, K, Ca, and Mg play key roles in balancing the physiological, metabolic, and biochemical processes of livestock. Moringa leaves contain high amount of macronutrients Mg and K, and can be effectively used to fulfill the dietary and nutritional requirements of  poultry by mixing of moringa leaves powder  with other feed ingredients.

The best method is to incorporate the leaves in the feed when you about to formulate. Milling the leaf with the feed had shown to improve the Digestibility, Performance and Growth of the birds. Moringa oleifera contains also some bioactive molecules which reduce the activity of pathogenic bacteria and improve the digestibility of other foods helping chickens to attain their genetic potential.  Moringa oleifera leaves are rich in minerals, vitamins and especially protein with eight essential amino acids. Thus, the improvement of chicken growth may be attributed to those essential nutrients contained in Moringa leaves. Moreover, the growth performance of chicks can be linked to the high digestibility of this leaf .Thus, birds fed with Moringa would have the beneficial effects of a reduced pH which inhibits pathogenic microflora growth in the digestive tract and improves gastric digestion.