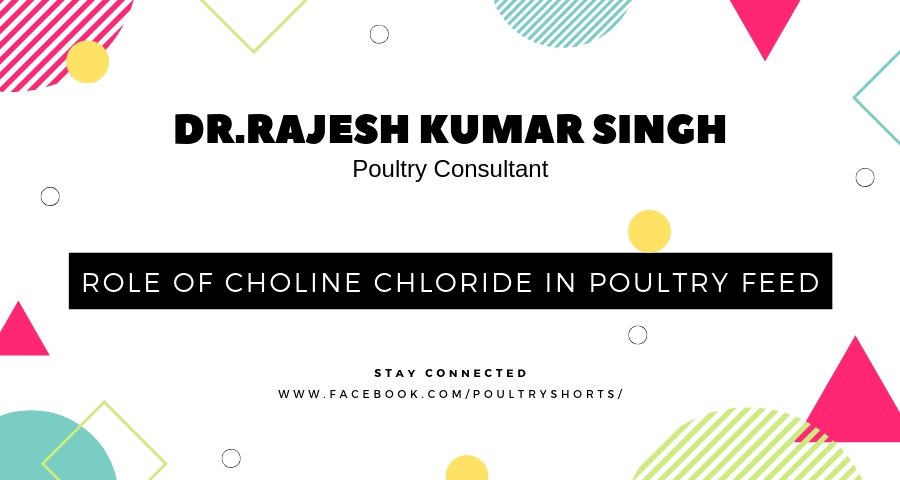 Choline chloride is used as an important feed additive in animal species, especially chickens. Choline- chemically known as 2-hydroxyethyl-trimethyl ammonium hydroxide and is referred to as vitamin B4. It has recently been claimed as a rediscovered vitamin & performance promoter in poultry.

The role of choline in the prevention of conditions such as and liver enlargement in chicks is already well known. Choline was first isolated from ox bile (“chole” in Greek) in 1849. Its nutritional importance has been recognized since 1930 and it is now a common dietary supplement for livestock & poultry. The main function of choline is to act as a lipotropic agent and prevents the abnormal fatty infiltration in the liver (Fatty Liver Syndrome) thus ensures proper metabolism of the body & effective utilization of the nutrients. Moreover, it helps in the formation of an excitatory neurotransmitter-acetylcholine, which is responsible for the proper functioning of the nervous system and maintains its harmony.

FUNCTIONS OF CHOLINE CHLORIDE ARE

2. Choline is referred to as a “lipotropic” factor due to its function of acting on fat metabolism by hastening removal or decreasing deposition of fat in . Choline plays an essential role in fat metabolism in the liver. It prevents abnormal accumulation of fat (fatty livers) by promoting its transport as lipoprotein and lecithin or by increasing the utilization of fatty acids in the liver.

3. Choline is essential for the synthesis of acetylcholine by mitochondria at the presynaptic terminal of the neural synapse, a substance that makes possible the transmission of nerve impulses.

Layers, like broilers, have an essential requirement for choline. Choline is required for the formation of lecithin, a component of egg yolk. Current NRC recommendations for choline allowances in laying hens are 105 mg/day for white egg layers and 115 mg/day for those laying brown eggs. On an average for the two it can be concluded that required dietary concentration of choline at feed intake levels of 100 and 110 g/day respectively, is approximately 1100 mg/kg.

There are several factors which influence a hen’s requirement for choline, like age, feed intake, and dietary crude protein or methionine levels. It is generally accepted that dietary requirement declines with age, possibly associated with increasing feed intake. Methionine is the first limiting amino acid for egg production and, given the common function with choline in methyl group donation, interactions between the two nutrients may be anticipated. Choline requirement in layers also varies according to the methionine and cysteine levels in feed. A diet rich in M+C has low requirement of choline and vice-versa.

The most important & limiting raw material, which decides the quality of the product, is Trimethylamine (TMA), which is highly corrosive in nature. If its level exceeds beyond the permissible limit i.e.>200ppm then it causes toxicity in birds. Due to its corrosive action, it causes sloughing of the intestinal mucosa & results into malabsorption (reduced nutrient utilization). Moreover, the fumes generated by TMA when entering the respiratory tract of the bird leads to the discomfort that restricts the birds from feeding & ultimately it results in reduced production and may cause even death. So the TMA content in the choline chloride should be low to prevent toxicity and better production.

Bioavailability is the most important parameter, which should be taken into account while selecting an ideal choline chloride. Each carrier particle (corncob) should contain 60% of choline if for its purity.

Bioavailability is also attributed to the particle size of the carrier material. The ideal particle size for broilers is 0.3mm while for layers it is 0.5mm. The size should match with the feed in order to prevent selective feeding & to ensure uniform mixing.

Since the carrier material used for the production of dry choline chloride is a corncob-agro byproduct, which is very much liable to be contaminated with various microorganisms. So it should be thoroughly checked for the presence of any bacterial contamination like E.coli & Salmonella, as poultry is highly susceptible for these pathogenic microorganisms, which leads to reduced production and mortality in the flock.