GOOD MANAGEMENT PRACTICES FOR THE BENEFICIAL USE OF POULTRY LITTER 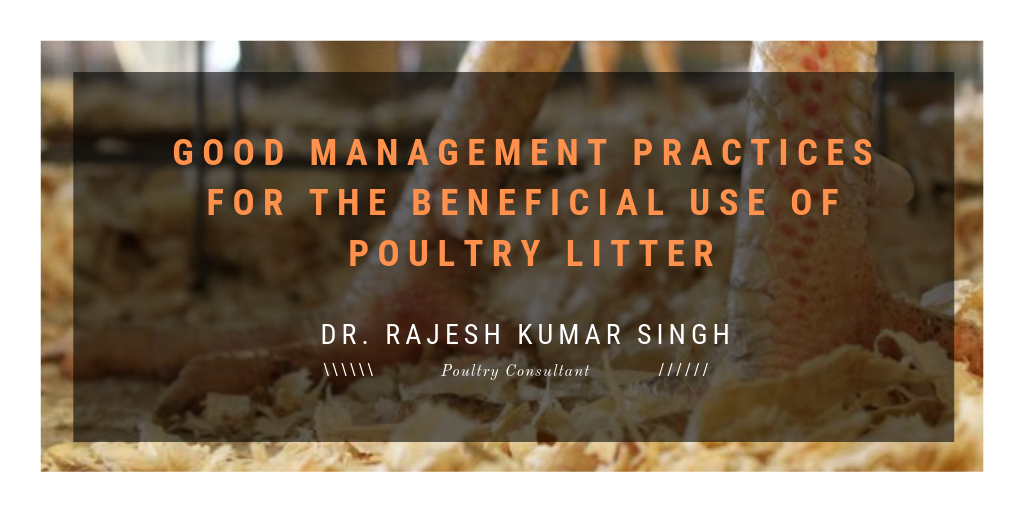 The approximated percentages of nutrient intake excreted by poultry are Nitrogen (65.5%), Phosphorus (68.5%) and Potassium (83.5%), elements for soil fertility and increased crop production.

Poultry litter is a good organic source of nutrients for raising crops, such as maize. However, the loss of N through ammonia is a major issue during handling and land application of poultry litter. These losses can be minimized through composting process in the presence of organic amendments, such as cereal straw. The success of of poultry litter as a valuable nutrient source and soil conditioner depends on developing technologies to produce uniform value-added products, and design of equipment for uniform waste product field application. Response of pasture, arable and horticultural crops, and silviculture species to poultry waste applications and their beneficial effects on soil physical and chemical properties should be examined in order to maximize the utilization of poultry litter.

USE & MANAGEMENT OF POULTRY LITTER

The poultry industry is one of the largest and fastest growing agro-based industries in the world. There is an increasing demand for poultry meat mainly due to its acceptance by most societies and its relatively low cholesterol content. The poultry industry is currently facing a number of environmental problems. One of the major problems is the accumulation of a large number of wastes, especially manure and litter, generated by intensive production. is voided by a layer as to Large-scale accumulation of these wastes may pose disposal and pollution problems unless environmentally and economically sustainable management technologies are evolved.

Most of the manure and litter produced by the poultry industry is currently applied to agricultural land. When managed correctly, land application is a viable way to recycle nutrients such as nitrogen (N), phosphorus (P) and potassium (K) in manure. However, pollution and nuisance problems can occur when manure is applied under environmental conditions that do not favor agronomic utilization of the manure-borne nutrients. The continued productivity, profitability, and sustainability of the poultry industry will likely be dependent on the formulation of best management practices to mitigate environmental consequences associated with air and water quality parameters that are impacted by land application, and the development of cost-effective innovative technologies that provide alternative to land application of poultry wastes.

Manure by-products have the potential for being recycled on agricultural land. Beneficial use through the land application is based on their ability to favorably alter soil properties, such as plant nutrient availability, soil reaction (PH), organic matter content, cation exchange capacity, water holding capacity, and soil tilth. Poultry waste contains all essential nutrients including micronutrients and it has been well documented that it provides a valuable source of plant nutrients especially for organic growers. Addition of poultry manure to soils not only helps to overcome the disposal problems but also enhances the physical, chemical and biological fertility of soils.
For example, continuous cultivation of arable soils often results in the deterioration of soil structure leading to reduced crop yield. Addition of poultry manure has been shown to improve the fertility of the cultivated soil by increasing the organic matter content, water holding capacity, oxygen diffusion rate and the aggregate stability of the soils.

Optimum use of manure by-products requires knowledge of their composition not only in relation to beneficial uses but also to environmental implications. Environmental concerns associated with the land application of manure by-products from intensive animal operations include leaching losses of N in sub-surface drainage and to groundwater, contamination of surface water with soluble and particulate P reduced air quality by the emission of greenhouse gases and volatile organic compounds, and increased metals input.

Air quality has become a major environmental concern of the poultry industry. Dust, odors and bio-aerosols (e.g. microbes, endotoxins and mycotoxins suspended in air) generated at production, manure storage facilities and during land spreading of poultry litter constitute the most frequent source of complaints against animal-based industries decomposition of manure produces odorous gases, including amines, amides, mercaptans, , and . These noxious gases can cause respiratory diseases in animals and humansmmonia volatilization from manure creates odor problems, and it may also contribute to atmospheric deposition and acid rain. Furthermore, greenhouse gases, such as carbon dioxide, methane, and nitrous oxides are also released from manure handling and storage facilities, which are implicated in ozone depletion and global warming. Improved manure handling and storage methods are needed to reduce the emission of these gases.

The quantity of poultry litter produced in a broiler unit depends on the litter (i.e. bedding material) management, and feed intake and its digestibility. A range of materials including wood shavings, cereal straw, husk paper clippings are used as bedding materials. Three common practices are adopted for litter management in broiler units. These include litter, partial re-use multi-use litter. The single-use litter involves the total clean-out of the house after each flock and replacement of the bedding material. Partial re-use involves the removal of litter from the brooding section for spreading on the grower section of the house. New bedding material is then spread on the brooding section. The partially spent litter is often composted for a few days to elevate its temperature to kill pathogens. Some of the spent litter may be removed after each batch, and after 2 to 5 batches the house is totally cleaned out. With the multi-use of litter, only caked material is removed and the house is disinfected. The litter in the brooding section is either left untouched or covered with 25 to 50 mm of fresh bedding material. The multi-flock litter may increase the incidence of pathogenic microbes and parasites and produces a spent litter with a much higher concentration of nutrients.

The major components of poultry litter include the bedding material, feather, manure, and the spilled feed.T he litter contains plant nutrients, such as N, P and K, trace elements, such as Cu, Zn and As, pesticide residues, pharmaceuticals such as coccidiostats, endocrine disruptors, and microorganisms. As with other organic wastes, the moisture content, PH, soluble salt level, and elemental composition of poultry manure and litter have been shown to vary widely as a function of types of poultry, diet and dietary supplements, litter type, and handling and storage operations.