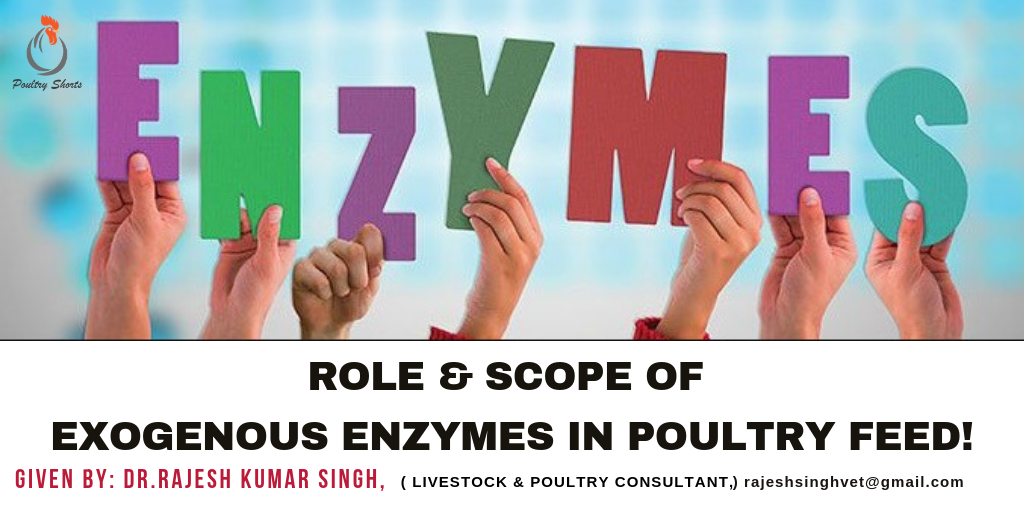 The poultry industry in developing countries is facing some challenges due to high costs of conventional feed ingredients like yellow corn and soybean meal which are mainly used in poultry rations. Thus, there is an urgent need for nutritious and affordable feeds. Nowadays, the feed represents about 75% of the total costs of animal production. Increasing prices of poultry feed ingredients caused us to look closely at other crops and agricultural by-products which are less costly than conventional feedstuffs. Therefore, the wastes of fruits and vegetables after harvesting and handling could be used as alternative sources of energy, protein, amino acids, vitamins and other nutrients in feeding poultry.

The inclusion of feed ingredients containing anti-nutritional factors may adversely affect poultry performance. Supplementation of commercial enzymes can enhance the nutritional value of crops containing high contents of soluble non-starch polysaccharides (of NSP’s). The NSP’s digestibility is very low in poultry and a large amount is voided via the excreta. The NSPs are able to bind large quantities of water and as a result, the fluid viscosity increases. Increasing viscosity may cause some problems in the small digestion of carbohydrate, protein, and fat.

Furthermore, the high viscosity of intestinal content increases the sticky dropping amounts. These problems can be resolved by the addition of enzymes to poultry diets. Increased use of exogenous enzymes is expected not only from the nutritional and economic aspects but also from the health and environmental point of view. Since enzymes improve nutrient digestibility and utilization, thereby mitigating the excreta output and lowering nutrient excretion, particularly excess nitrogen, phosphorus, zinc, and copper Enzymes, which may not be produced in large levels by the birds, are suggested to be supplemented to the diets. The anti-nutritional activity of cell wall NSPs had impaired impacts on growth rate and feed efficiency.

ENZYMES ACTIVITY: Enzyme is a functional protein that stimulates or accelerates the rate of specific chemical reactions. Enzymes activity is reliant on the substrate in a random way or at a very particular site on the substrate. The high content of fiber limits usage of sunflower meal (SFM) in poultry diets. The solution for this problem may be using exogenous enzymes and hydrolyze the NSPs, which could be used by avian and increase energy utilization.

SOURCES OF ENZYMES: Enzymes are created in each living organism from the simplest unicellular forms of life to the highest developed plants and animals. Most of the enzymes presently used in the beverage and food industry are from Aspergillus, but cellulases and hemicellulases are derived from Trichoderma. Newly, genes encoding has been used in cloning for various enzymes, including phytases, xylanases, and β-glucanases and expressed in various commercial systems (plants and microorganisms). Probably, large amounts production of an inexpensive enzyme by permanently selecting suitable microbes, increasing them in systems of modern fermentation and by efficient regulation of the enzyme extraction and purification.

THE BENEFICIAL ROLE OF EXOGENOUS ENZYMES: Poultry industry is becoming increasingly receptive to the use of exogenous enzymes supplementation. Enzyme supplementation to the poultry rations has a positive effect on feeds digestibility and leads to better productivity and performance. Moreover, supplementation of commercial enzymes can increase the nutritive value of feed ingredients and diets as well as allow greater flexibility in diet formulation. It has also a potential effect on the mitigation of environmental pollution by reducing the excretion of some elements such as nitrogen and phosphorus in poultry manure.

WE CAN SUMMARIZE THE BENEFITS UNDER FOLLOWING HEADS

HEALTHY ENZYME BENEFITS: Enzymes have been shown to work both in the foregut and hindgut of chickens. During the transit of digesta in the duodenum, jejunum, and ileum, they remove fermentable substrates that could impact digestibility and impact gut microbiota balance. During the caecal phase, degradation products of sugars, such as xylose and Xylo-oligomers, are fermented by caecal bacteria. Enzymes xylanase not only reduce digesta viscosity through the hydrolysis of soluble arabinoxylans in the small intestine but this process also generates arabino-xylo-oligosaccharides (AXOX) to be fermented, particularly in the caecal phase. These act as prebiotics, selectively stimulating the growth of beneficial bacteria. They also produce short chain fatty acids (SCFA) in the intestine, which in turn can be utilized as an energy source by the animal. In chickens, they have also been shown to reduce Salmonella in the bird’s caeca, cloaca, and spleen, increments in caecal production of volatile fatty acids (VFAs) due to the application of xylanase in wheat and corn-based diets.

Bans are already in place on the use of the antibiotics as growth promoters (AGPs) like the EU and many developed countries, and it seems increasingly likely that market pressure for AGP removal in poultry production in places like the US, India will limit their use. The time is therefore right to identify an alternative means of improving liveability, as well as performance and profitability. With pressure constantly on the poultry industry to reduce production costs without compromising bird performance or gut health, the use of multienzymes, with or without other additives such as probiotics, appears to offer good opportunities to unlock the potential nutritive value and healthy potential of feed, and offer associated cost savings. Exogenous enzymes show up as tools on poultry diets formulation flexibilization, allowing the utilization of non-conventional ingredients without impairment to birds’ performance, with a consequent reduction on production costs. Additionally, enzymatic supplementation can reduce environmental problems, improve livestock surrounding, reducing wounds and improving, therefore, birds’ welfare.